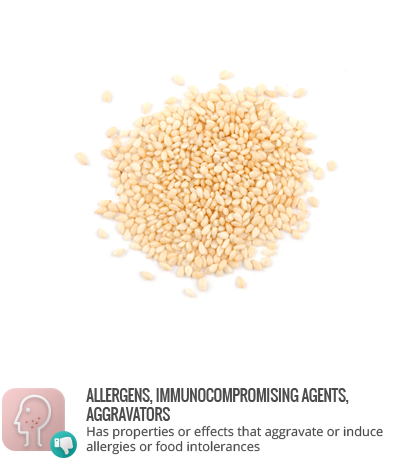 Sesame is the small, flat, oil-rich seed of the Sesamum indicum plant. Sesame seeds are a common allergen.

Sesame oil is rich in Omega 6 fatty acids, but poor in Omega 3 fatty acids. The seeds are high in protein and a source of lignans, estrogen-like chemicals that act as antioxidants. Such lignans may also alter metabolism of fats within the body and improve triglyceride levels. See: Lignans, Sesame oil.

Certain highly refined oils do not require listing of allergens as the protein content is likely minimal; however caution should be exercised based on severity of allergy. Labeling of sesame as an ingredient is not mandatory in all countries, and declaration of cross-contamination may not be mandatory even in countries that do require labeling of sesame as an ingredient.