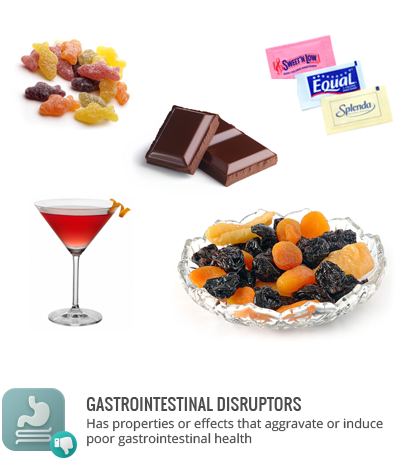 Sugar alcohols are molecules derived from sugar that are widely used in the food industry. Sugar alcohols are less sweet than sucrose (white sugar) and have a fraction of the caloric value. There are a variety of sugar alcohols including xylitol, mannitol, erythritol, isomalt, sorbitol, glycerol (glycerine). They have different applications, including solvent, filler, thickening agent of liquids, humectant, and preservative; most are used as sweeteners.

Sugar alcohols are not completely absorbed by the small intestine (excepting erythritol). This leaves them to be fermented within the large intestine which can cause bloating, flatulence, and have a laxative effect. The laxative threshold, the quantity of sugar alcohol ingested that causes symptoms, varies between sugar alcohols and individuals. Sugar alcohols have a smaller effect on blood glucose than sugar, making them popular in diabetes-specific products. They have no effect on tooth decay and may prevent it. See: Xylitol, Mannitol, Erythritol, Isomalt, Sorbitol, Lactitol

Sugar alcohols may be synthetically produced or isolated from plants; they are not considered artificial sweeteners. Erythritol is typically the most tolerated as far as gastrointestinal effects, and among the lowest calorie, at 0.2 calories per gram.