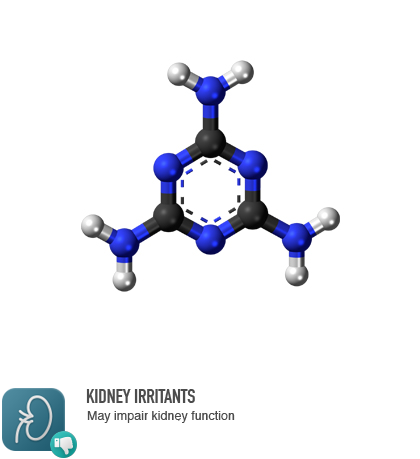 Melamine is an organic chemical most commonly found in the form of white crystals rich in nitrogen.  Melamine is commonly used in plastics, resins, adhesives, countertops, dishware, whiteboards, molding compounds, coatings, and flame retardants.  Melamine is regularly used to adulterate foods such as wheat gluten, rice, milk and infant formula to make them appear richer in protein. In 2018, this chemical was intentionally added to milk as a fake protein, allowing Chinese milk producers to dilute the product while fraudulently passing nutrition tests. This melamine incident affected 300,000 infants and young children, with six reported deaths due to kidney failure and urinary tract effects.

Melamine causes bladder stones and can form crystals that can give rise to kidney stones. Melamine can cause kidney failure and is a known carcinogen in animals.

Plastic tableware from certain countries can contain high levels of melamine. Melamine can migrate very slowly out of the plastic into food that comes into contact with the tableware under high heat conditions and for several hours.

Melamine is a common adulterant in foods such as wheat gluten, rice, milk, and infant formula to make them appear richer in protein. Adding melamine to food is not approved by the FAO/WHO Codex Alimentarius or for that matter by any national authority. However, melamine is still found in a number of different brands of powdered infant formula, wheat gluten, frozen yogurt, and in even canned coffee drinks. Melamine is also found in pet food; in 2007 pet food was found to be contaminated with melamine in both the USA and in the EU. Although melamine is not registered as a fertilizer in the U.S. nor in the EU, it has been used as a fertilizer in some parts of the world.