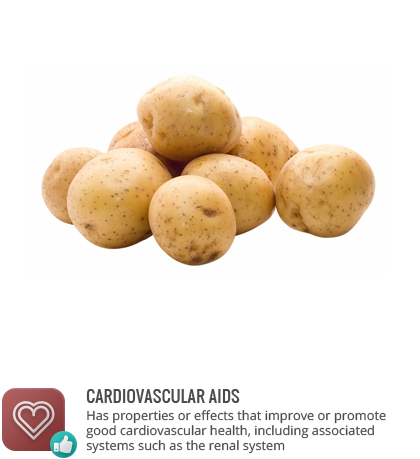 Potatoes are the tuberous crops of the Solanum tuberosum L. plant. Regardless of variety, potatoes in general are one of the world’s most heavily consumed crops. A dietary staple in many cultures, the potato is also important for alcohol production in liquors such as vodka, aquavit, and potcheen.

Potatoes are a good source of vitamin C, vitamin B6, fiber, potassium and manganese. When part of a balanced lifestyle, including a healthy diet and exercise, potatoes have been associated to lowering blood pressure, improving fatty acid profiles in the blood, and decreasing markers of inflammation. Though, given the wide variety of potato-containing products in the standard “North American Diet”, it is difficult to get unadulterated evidence for the risks or benefits of potato consumption. One study found that the difference in mineral content between many organic and non-organic potato varieties was statistically significant, though very minimal, suggesting that it would be reasonable to stick to the non-organic variety.

A study conducted in China found that potatoes are susceptible to cadmium absorption in cadmium rich fields. This study also noted that many of the potatoes tested exceeded the maximum levels of cadmium allowed in the human diet. These findings are important as China is a large producer of many crops sold worldwide. See: Cadmium